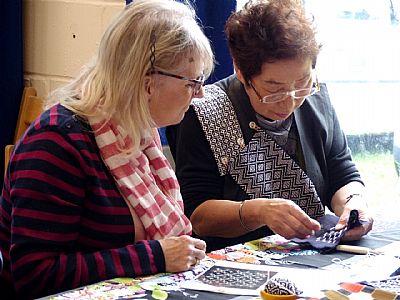 There will be 'Make and take demonstrations' with the Yuza Sashiko Guild in the West Church Hall on Saturday and Sunday 14th/15th March.

Yuza Sashiko Guild's teachers are coming to Dornoch with Susan Briscoe to exhibit their work and demonstrate the art of sashiko.  The Yuza Sashiko Guild have taught ‘make and take’ rolling workshops at UK shows several times including at the inaugural Festival of Quilts (2003), Loch Lomond Quilt Show (2010), Quilts UK (2016), The Scottish Quilting Show (2020) and teaching at World Textile Days in 2016 and 2018.

Sashiko in Yuza Town features original and diverse hitomezashi (one stitch sashiko patterns) made stitch by stitch with minimal marking.   These beautiful patterns were passed down during the Showa period (1926-1989) and used in traditional working clothes.   Many of the geometric patterns resemble blackwork, and all are made with running stitch.

Come to the West Church Hall to have a go at traditional Yuza Sashiko!

There will be a small charge for the materials and patterns, payable direct to Yuza Sashiko Guild.

The Guild have also published their first English language sashiko book and will bring some copies for sale.